This session commemorated the first anniversary of my mother's passage, and was held at our house in Defence Society, Karachi. We thought it befitting of her memory to hold a qawwali mehfil to listen to some of her favourite music. From the outset, the atmosphere was charged. The underlying theme was one of remembrance. The emotional undertones made Razi Mian and his sons surpass themselves and almost every piece in this session is a gem.

The Qaul - Mun Kunto Maula set the stage, with its ethereal alaap. I feel that this is their best rendition of this Qaul. And while the 1969 Manzoor Niazi aur hamnawa version is unsurpassed, the version sung at this session is technically brilliant.

They next went into a grand rendition of a combination of Raaga Adana and Bahaar, the Adana was set to the apt bandish Tairay Darbar Main Ayin Hun. This rendition was sung with Ayaz at his best. In this piece and in subsequent pieces, his galaakari is both complex and sweet. This is the very gaayaki angh of vocal traditions that is championed by Vilayat Khan and his Gharaana on the sitar. Ironically, Ayaz consciously modulates and emulates the melodic structure of the sitar rendition of the raaga, and it seems that the sitarist seeks to outdo the vocalist and vice versa: I cannot make up my mind as to which is sweeter, Vilayat Khan on the sitar or Ayaz's vocal expression.

The Bahar was expressed through the bandish Phool Rahi Phulwari, in recognition of the fact that all my mother’s children and grandchildren were there, a rare occurrence since we are spread all over the world. A lovely touch was when Razi Mian said 'Yeh baat yaadh rakhni chaahye kay jin ki yaad mein mehfil ho rahi hay yeh un ki phoolwari phool rahi hay.’ I was moved by this observation and I put some money in my elder son Juni’s hand (he was not yet 5 years old) and asked him to offer bail to Razi Mian, thinking Juni would put it at his feet, as I usually did. Instead, he toddled over, and lifted Razi Mian's cap and put the money on his head and replaced the cap. I was momentarily shocked at this irreverence. But my son’s actions elicited such a tender response when Razi Mian grasped Juni's little hands, and held them, kissed them and raised them to his eyes...I wished we had been able to videotape this emotional and deeply touching moment!

The second part of the mehfil started with Raag Shahana, bandish Bakhubi hamcho mah tabindah baashi, that familiar, classic Ameer Khusro composition. They surprised us, however, by singing something, hitherto unknown to us, in singing Raaga Bhimpalasi in its separate components and then the composite raaga. Popular awareness knows only the latter.

By the time they got to Khabaram Raseeda Imshab, after that brilliant rendition of Bhim, Palasi and Bhimpalasi, they were really cooking, in current parlance, and so was the audience. The tarana in Khabaram Raseeda is electrifying!


If there is a favourite part (it is difficult to choose favourites in such a stellar mehfil) it is the performance captured in Vol. III. The Chaap Tilak rendition presents a medley of raags, from Bilawal to Mand to Maru Behag to Kalawati. The initial bandish — Aey Dayyah Kahan Gaey veh Logh, in Raaga Bilawal — set a powerful, plaintive context for the rest of this piece. And they have drawn bandishes from all sorts of poets to retain the thread of remembrance. It requires an incredible mastery to sustain the melodic continuity with all these raagas being blended, not to mention the poets and poems they have drawn from to maintain a singular poetic context.

They also sang a beautiful Hameer, my mother's favourite raaga, which caused a bit of an emotional tug. Every one of their renditions of this raag is special, but this one seems unique in its vibrancy.

Another novel presentation was delivered when they broke out into something we had never heard, the poem Yaad Hai Kuchch Bhi Hamaari Kanhaiya, Radha's plaintive plea to an absent Krishna, after he leaves her to claim his kingdom. This was, for me at least, a new discovery in their repertoire.

Abu Mohammad and Fareed Ayaz had gained great confidence, and we agreed that they were ready for international exposure. The next year, a tour was organized, covering London, Vienna and Amsterdam. It was done on a less-than-shoestring budget and marked the beginning of a rich itinerary of international travel for Fareed Ayaz, Abu Mohammad and their group.

All in all, this is probably the best session in our collection of their performances. Their enthusiasm and energy was matched by that of the audience. Baboo Mamoo (the famous Naseer Haidar of IAL Karachi), Ali Raza and Akhtar Ispahani were in their elements and can be heard expressing their appreciation in terms of great gusto (such as 'Yo!YO!YO!' or 'Hauwwa! HAUWWA! HAUWWA!' during the Chaap Tilak and Mareez-e-mohabbat) as the evening wore on.

Talking of my cousin Ali Raza, he was so much in his element. You can hear his daads at the beginning of Track 2 of Volume III. The ghazal being (in my opinion) rather mediocre, I asked him at the end of this piece: Meer Sahib is main kya khasiyat dekhi aap ne? And he replied: Yaar Asoo, bas aisay hee liay daad main ne dee in (ie Qawwallon) ka haunsla barrhanay kay liay, at which point I replied: Yaar in logon ka haunsla asmanon tak pohoncha hua hay, aur aap us say bhi agay barhana chah rahain hain? And we both burst out in laughter.

I see Ali's smiling face before me at this time.... No mehfil will ever be the same without him. I dedicate this posting on the blog to his memory.—Asif Mamu 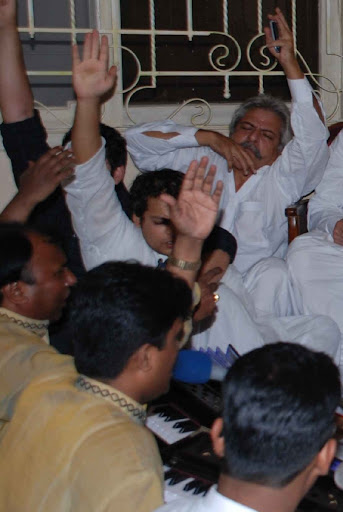 Ali Mamu immersed in state of haal at a qawwali in 2007.

The Qawwalis sung were:


EDITED on 1 August 2008: Rearranged the sequence of qawwali tracks to match the order found in the original cassette tapes. Modified the text to: reflect the fixed sequence, correct the name of the raag for the Tairay Darbar piece, and add Asif mamu's recollections regarding the Phool Rahi Phulwari piece.

--
Notes:
Text of blog post taken from "Notes on the Music" by Asif Mamu.
Posted by bohotkhoob at 9:56 PM

A delight to read and listen. The atmosphere that evening 20 years ago must have been truly wonderful. I am glad that you preserved it and shared it with other lovers of sufiana kalam.

This will help to keep alive the memory of your mother, Ali Raza, Munshi Raziuddin as well as that beautiful evening.

To AK on behalf of Asif mamu:

"Thank you, AK, for your kind thoughts. It is a source of pleasure and pride to share this beautiful music with friends such as yourself.

May your prayers bring eternal peace to those who have departed, who enriched our lives so much by being with us.
-Asif"

Thank you so much for this blog. It is priceless. I am listening to it all the time since last week and can't get enough of it.

I simply don't have words to thank you for sharing these gems with other people.

There seem to be some problem with mediamaster today as the tracks are not playing. It will be great if you can fix it and also enable people to listen to more than 30 secs of track on mediamaster website. However, it is your prerogative.

Thanks for the nice comments. We are always happy to hear that visitors are enjoying the music. MediaMaster recently announced that they are shutting down. Their business model did not take off. They were great while they lasted.

Enjoy the music while it's still running.

Awesome stuff here, its such a pity that its now inacessible b/c of MM.
Will be more than happy to host it though, this stuff should be heard!

It was always a pleasure to revisit the blog every few days and give these brilliant recordings a listen. If MediaMaster's folded, there's plenty of places that can host the audio. Try eSnips or divshare,they're brilliant.

Thanx alot for the absolute gem of a music (Particularly the 1969 one) !!! My uncle who is in Hyderabad Deccan (India) asked me to thatnk u all ,he was @ that Mehfil !!! He is wondering if you can upload the "Ashloks" recited by Raziuddin sahab in that particular Mehfil !! Apparently he read them in Detail with explanation !!! PLZ this will give my uncle great joy !!!

My Apologies!!!! I live in Australia and my uncle is in Hyderabad(India), What I meant to write in my previous msg was the recordings of "Jashne Hzt Ameer Khusro " probably late 60's to mid 70' , He is absolutely +ve abt the Ashloks ( Thats what he calls 'em )!!! Would you plz be able to give me ur Email Address or a contact #??? My email address is sms2611@yahoo.com.au

thank you for this beautiful music you are posting here. this is soulful music i just can't get enough of.

Dear Bohotkhoob AoA
Thank you so much for sharing such a wonderful posts...but unfortunately the kalams are not playing...can you please advise how can we play them??

once again for valuable posts...waiting for your suggestion.

Divshare blew a drive where all our music was stored. I'm uploading the sessions again. The tracks should be playable soon.

The Taj
by
Bilal Dallenbach
(1949-2010)
Bilal was a prince among men, a man of passion and zest for life. His aesthetic ruled his world, his relationships, his life. He was a river of love and joy that fed many souls and has now reached its ocean of tranquility, his eternal destiny. We will watch many a sunset over this ocean and think of him, with a smile on our faces, and a glow of love in our hearts. Thank you Bilal for having enriched so many lives. May you rest in eternal peace.
---

I live my life in growing rings
which move out over the things around me.
Perhaps I'll never complete the last,
but that's what I mean to try.
I'm circling around God, around the ancient tower,
and I've been circling thousands of years;
and I still don't know: am I a falcon, a storm, or a great song.
— Rainer Maria Rilke.