This was Fareed’s first reaction I asked him to sing at Abba’s chambers at the Sind club for this performance.

This concert was held in February 2005, to commemorate Abba’s 90th birthday.  It was held one month after the Abba’s actual birthday.  In January of that year, a birthday bash was held at the Club, organized by his many friends and admirers.  I could not make it to Karachi for the party, since the obligations of profession and work intervened, keeping me in Vienna or maybe on the road to another country.  So I came to Karachi as soon as I could and this concert was organized by way of atonement….

I was somewhat surprised at Fareed’s remark.  Truly, Abba had a keen ear and knowledge of music, surpassed by few.  However he was the kindest, most non-judgmental of people and invariably sought the good in others rather than dwell upon their weaknesses.  He dealt with the meek and the mighty with equivalent humility, gentleness and attentiveness.  This characteristic was reflected in his comport as musical audience. 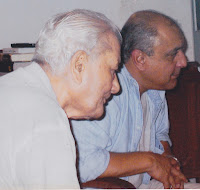 Two beloved friends in a state of hypnosis.  The Late Mehdi Hasnain Sahib and the Late Bilal Dallenbach

This was the first session we held after Munshi Raziuddin’s passage in 2003.  His absence created a large void, and I suppose Fareed and Abu Mohammad felt some apprehension at attempting to satisfy Abba’s discerning taste without their father’s guidance and stewardship of the performance, as had been the case thus far.

The setting was simple, informal and intimate with a few close friends, family, and the qawwals in Abba’s room.  Fareed and Abu Mohammad presented the recital with virtuosity that reflected firm resolve to preserve and build upon the rich legacy of knowledge and training bequeathed to them by their father.